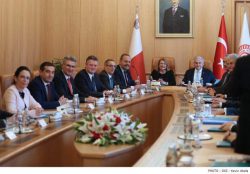 While addressing a Turkey-Malta Business Council Meeting in Istanbul, the minister said trade relations between Malta and Turkey stand on a solid platform, as both countries continue to maintain the steady economic growth experienced in recent years.

These sectors include the Maltese-Turkish Joint Economic and Trade Commission (JETCO), cooperation in health care and medical science, maritime cooperation as well as collaboration in education.

The Turkey-Malta Business Forum, which was organised as part of a state visit to Turkey by President of Malta Marie-Louise Coleiro Preca.

Political consultations also focused on Turkey’s EU aspirations. Malta conveyed its long-lasting support for Turkey on its path to align with the EU acquis, based on Malta’s conviction that Turkey is a key partner for the EU.

This state visit unfolds a month after the most recent visit to Malta by Minister of Foreign Affairs of Turkey Mevlüt Çavuşoğlu in December 2018, and following several exchanges at the highest levels.

The Maltese delegation was accompanied by Malta’s Ambassador to Turkey Carmel Vassallo and the Consul General in Istanbul Franklin Aquilina. Ambassador